From the foundation of the Republic to the Punic Wars, Rome expanded from a small city to the dominant power in Italy. It was a series of wars that lead to this dramatic expansion. Officially, Rome believed in defensive wars only, however, they did not shy away from preventative strikes. They collided with the expanding Samnites. A dramatic loss caused them to replace the old, highly structured phalanx system with smaller unites, allowing greater flexibility. After several victories and setbacks, the Romans emerged victorious.

Rome had subdued the peoples to the north (Etruscans and Gauls) a few years later. Meanwhile, they extended their sphere of control to southern Italy. Despite difficulties, the domino effect of war and conquest seemed unstoppable. In only 70 years, the Republic ruled from the Alps to the boot of Italy. And, almost immediately afterwards, Rome was at war with enemies from further afield including Carthage.

Cincinnatus (Lucius Quinctius Cincinnatus) was consul and dictator in the early years of the Roman Republic. The man was prompted to legendary status by the foundation of the Empire, seen as the epitome of civil virtue. 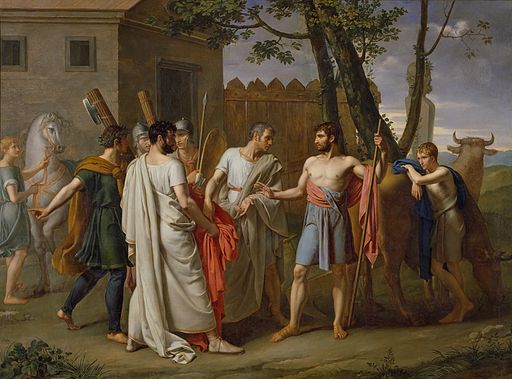 Trouble with the Aequi

As the story goes, Cincinnatus was a patrician who had served as a consul, but had fallen on hard times since. The worked alone on his own small farm. In the year 458 BCE, the neighboring Aequi tribe besieged Rome.

The Roman army, lead by an incompetent general, was trapped on a mountain south-east of Rome. In desperate need of a skilled general, the senate turned to the elderly Cincinnatus. They elected him as dictator. It's important to know that this was an office built into the Roman system of government for emergencies, and the dictator would only have the position for six months. In that time, they had complete authority. Despite the power and prestige of the office, Cincinnatus hesitated, unsure why he had been chosen for the task, but after pleas from the delegation he agreed to become dictator.

According to legend, Cincinnatus defeated the Aequi and returned to his plow within fifteen days. As was traditional, a big triumph (a parade for victorious generals) was held. The emergency over, Cincinnatus famously stepped down from his office as dictator without serving the full six month term. Not interested in self-engrandisement, he simply returned to his fields to continue life as a poor man. His example was held up by later patricians as an example of honourable character and service to the state.

This was not the only time Cincinnatus became dictator. In 439 BCE, a plebeian was supposedly attempting to bring about a tyranny over Rome. Rome had been caught in famine leading up to this. An ex-consul was given the role of overseeing grain provisions, tasked with ensuring enough grain came to the city. However, rumours abounded that a wealthy plebeian named Maelius was hoarding the grain with the intention of selling it to people cheaply or even giving it away for free, so that his popularity would rise among the people. Cincinnatus was then called up again to be dictator. When Maelius refused to come before him, Cincinnatus ordered his death.

Cincinnatus's legacy was that of a patrician hero. For many patricians he was a bastion of civil virtue. He was no so popular among the plebeians during his lifetime. They considered his powers excessive and feared the man, or so Livy says.

Did Cincinnatus exist? Are the myths around him true? The answer is not known, but that is mostly unimportant. Cincinnatus's story is a backdrop that later events of the Republic can be viewed.

Struggle of the Orders

Roman historical tradition believed that the early history of the Republic was defined by a struggle between the patricians and the plebeians. What exactly was meant by "plebeian" has been debated, but it generally taken to mean though who did not belong to one of the patrician families. Around 487 BCE, the identity of a patrician was established when they closed off their ranks to newcomers and established themselves as an exclusive aristocracy.

The nature of the early conflicts are difficult to pin down, as the ancient writers likely saw the issues of the more recent conflicts and retroactively applied them to the more distant pass. What can be seen is that the conflict between the classes from the 360s to the 280s BCE had several issues that dominated.

Each of these issues was solved over time. The expansion of Rome allowed landless citizens to be settled into new realms and the influx of war captives allowed the debt slavery to be abolished. Political posts were opened up to plebeians one by one. In 342 BCE a law mandated that one of the consuls must be a plebeian. These changes were slow, as the problems facing the government were too great for quick and lasting solutions.

Values of the Elite

The elite slowly developed a specific system of values due to the pressures upon their rank. The community depended on their skills as leaders, and they depended on the community's support. Thus, leadership and service to the community were the most important. The collective values also helped control the intense competition that between the nobles as they struggled for high ranking offices. The plebeians themselves came to praise discipline and solidarity.

Despite social disagreements and despite their indispensable and powerful role in the army and assembly, the plebeians did not seek to overthrow the existing structures. Instead, remarkably, compromises were made between the classes. This allowed Rome to remain strong, avoiding serious internal conflict, and emerge more unified than before.